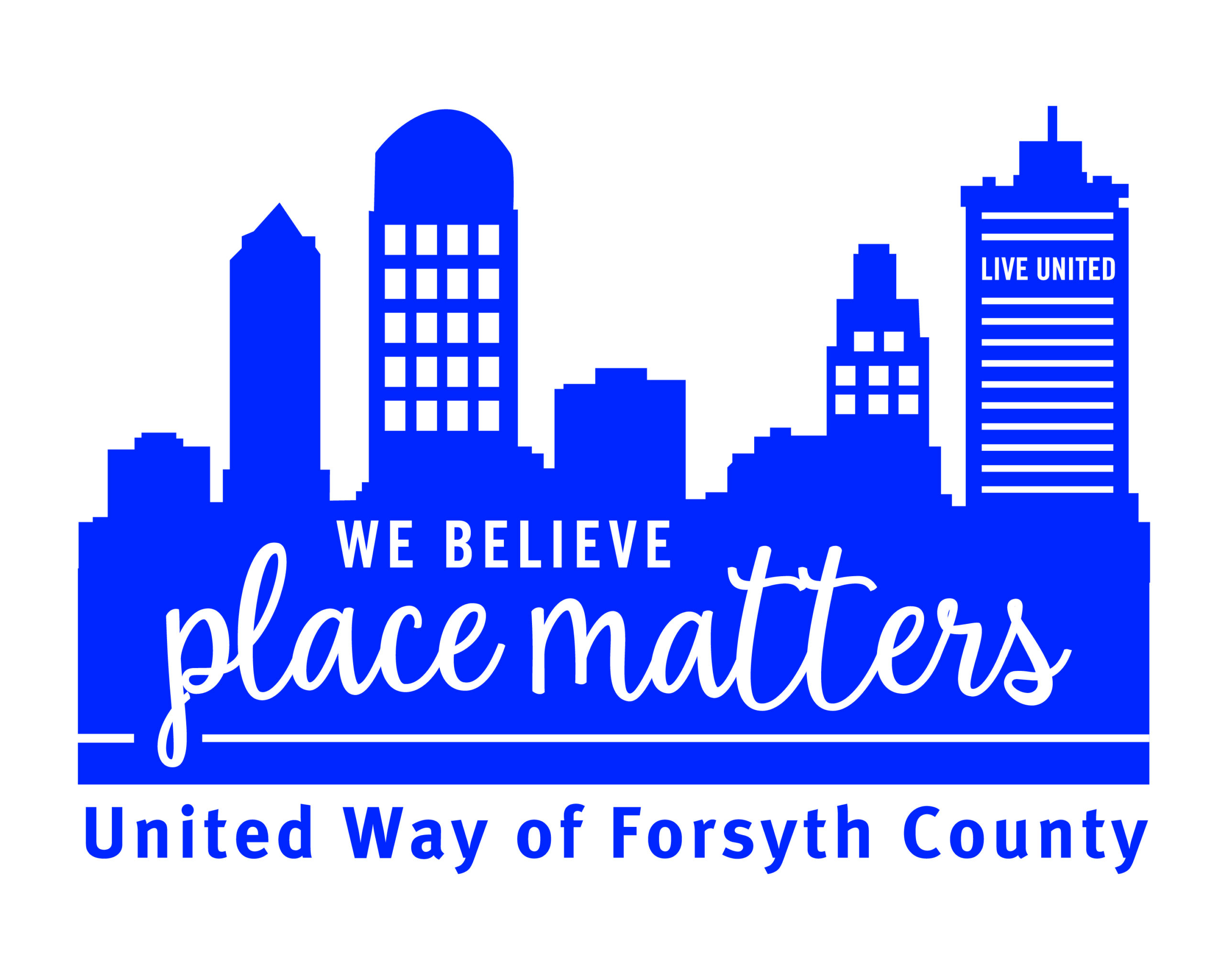 Despite numerous initiatives in Forsyth County, North Carolina, poverty has increased by 70% over the last ten years in Winston-Salem. Out of the 100 largest metro areas in the country, Winston-Salem ranks 7th in the largest increase in the number of poor people living in neighborhoods of concentrated poverty. Recognizing this growth in certain communities, United Way of Forsyth County (UWFC) asked themselves, ‘What does this mean, and what is our role in this?’

UWFC began the first conversations around what building stronger communities may look like in 2012, following a strategic planning process. Through developing relationships, adaptive learning, and an openness to the process, the Place Matters program evolved over the course of several years, and in July, 2016, the first of $2.8 million in funds were distributed to programs focused on strengthening the neighborhoods UWFC identified as focal locations.

UWFC began by looking at place-based work that was going on in Atlanta, Greenville, Cincinnati, and Louisville. By reviewing existing programs, combined with census and community data, they were able to better understand what Place Matters would be, and what they would do differently. They asked themselves, ‘what are the assets within each community, and how do you connect all of them and get them to work together?’

In 2013, UWFC started hosting networking nights in 13 different neighborhoods, inviting neighbors to come together and meet one another. From these monthly meetings, they identified influencers within each community, people who were engaged in the work, people who trusted the process. These individuals became the Resident Impact Council for their neighborhoods. All of the UWFC work for Place Matters is done through this council. Survey data compiled in the neighborhoods were presented to the council, and these residents used the data to set the priorities for the neighborhoods. The four guiding priorities they settled on were Unemployment and Underemployment; Multigenerational Support; Housing and Housing Stock; and Healthy Living.

Every community has its own set of challenges, resources and needs. There isn’t one blanket solution that will transfer across communities, so it is imperative to the success of Place Matters that it is resident-led and addresses the priorities determined by the residents. The work is owned by the residents in these communities, and the United Way supports that work. “We can simply go in and say we are trying to build stronger communities,” says Alana James, UWFC’s Director of Community Based Collaborations. “But what that means to individuals who actually live and work in a neighborhood is going to be determined by them. I think that’s something, not coming in with the end in mind, but simply coming in to say we are all going to buy into this process and we are all going to do it together and we are going to understand what role we can play in support of that.”

While UWFC is not a direct service provider, they have become more involved in this program than in previous programs by being direct relationship developers.

Trust is not transferrable. In order for an organization to build trust within a community, they need to be present, to listen to the community members and build those relationships. Moving to different communities, or even working with new members in the original community, that process needs to happen over and over again. This is what United Way of Forsyth County discovered through developing the Place Matters program. Moving away from the more traditional role of a United Way, Place Matters works to build direct relationships within the neighborhoods they are working to serve. Trust is the lifeblood of this work.
UWFC works as a convener in strengthening existing relationships and bringing new relationships to the communities. Through the Resident Impact Council, community members are able to share their direct experience and help identify what some of the priorities are from the neighborhood. “We had the survey data, as well as the input from this group of individuals, as well as census data/population data,” says Alana. “We have the numbers, that’s half the story. Help us make sense of this. That’s something we really wanted to hear the stories from individuals to help us make sense of that data. Then when we crafted those priorities, we went to the communities and said, ‘can you help us achieve these goals?’”

“If we don’t hand over the control to people who are living in these communities, we will never really have a long-term effect,” adds Cindy Gordineer, President and CEO.

Showing up with a sense of learning together around the work and being comfortable with not having all the answers has been a large part of the authentic trust building in Place Matters. According to Alana, “adaptive learning has been the way that we describe what we expect from any partner that we are investing in to help us partner around this work, as well as asking that they be patient with us as we go through a process of adaptive learning. We say, ‘can you give us some feedback?’ and they come back and see that we have acted on that feedback.

“The individuals who said we weren’t doing anything different or, ‘we’ve seen this before and it doesn’t really work here and here’s why I think so,’ helped us really make the decisions around what we were going to invest in. Now that we have invested in them, they are the eyes and ears, they are on the ground making sure that people are doing what they say they are, but also helping. Helping get the word out. Attending things. Providing valuable feedback and leading and guiding this work.”

Through Place Matters, UWFC has grown to understand that relationships are really what are going to change the face of things, not just more money. By bringing additional relationships to an area that has been underinvested, Place Matters has been able to build connections in the neighborhoods, between the neighborhoods, and with the rest of the community. “We aren’t always the ones who have the answer, but we might know someone who does. So not only making sure we are going in it and trying to be supportive, but also bringing in other people and welcoming them and saying this is still just a part of this larger community,” says Alana.

We don’t have all the answers

Showing up with all the answers does not build trust in any relationship. By being willing to make and admit mistakes, being willing to say, “I don’t know,” UWFC has fostered stronger relationships in the communities and with their partner agencies. “People are always afraid to say, ‘I don’t know,’ or, ‘this didn’t work,’ but when something doesn’t work or something can be better and people see that you acted on that and see that their feedback has actually been taken into account, that just further strengthens the relationship because you are seen as an equal partner in this work,” says Cindy. “Just as the people that we have best relationships with, we prescribe good intent to them. We assume that they weren’t trying to harm us when they made a mistake. These relationships build that in. So when we make a misstep, it isn’t seen as a misstep. Oh, you didn’t know this and now you know. The relationship builds in on both sides that forgiveness, and that expectation that you are doing this from the right reason.

“A big part of our role now is to make sure a lot of this very carefully builds trust, and protecting and nurturing it as best as we can and so that we don’t let one wrong step bring us back to the first step.”

Another important role UWFC sees for themselves is to continue to make sure that the voices of the residents are the loudest voices. In the past, this is not the way UWFC has worked, and it is not the way a lot of their partners have worked. By being vigilant in respecting the residents’ voices, they hope to avoid falling back into old patterns.

Place Matters has impacted everything UWFC does now. It has changed their understanding of the importance of relationships and about working more directly with people and building those stronger connections. They recognize that long-term wins take a long time. Stronger communities are not built overnight. It can take many generations to make this change. And they are ok with that. Some progress may be very slow.

Foundations need to allow their grantees the comfort of coming in and saying what’s not working well, and if everyone is saying everything is perfect, no one is going to learn anything. “For us,” says Cindy, “to change that dynamic, we have to model that dynamic. When we are wrong we have to say we are wrong. Our intent is good, and our goals are the right goals, but we don’t have a defined path that we know is going to get us to them in 20 years. If we weren’t willing to figure it out, then we would only be able to do things that we could accomplish in the next 6 months, because that is as far as we can see. In order for us to work longer term, we have to be willing to be wrong a lot because we cannot see further out, and that also allows us to model it for our partners.”

Alana James is the Director of Community Based Collaborations for the United Way of Forsyth County. Cindy Gordineer is the President and CEO for UWFC.