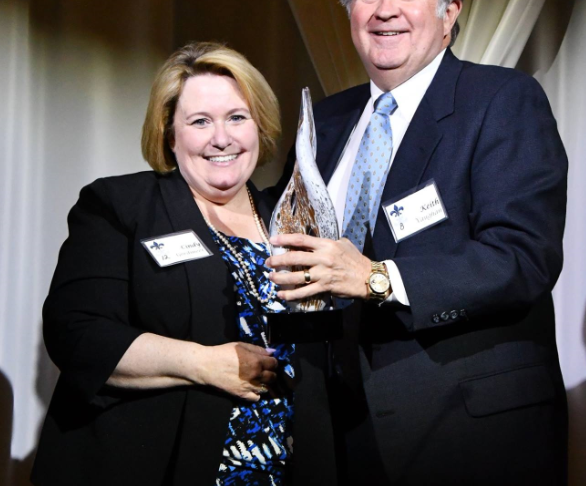 On April 12, 2018, The United Way of Forsyth County recognized key philanthropic leaders in the community at its annual Tocqueville Leadership event.

The Paul Fulton Tocqueville Leadership Society Award was established in 1987 and is presented annually by the Society to an outstanding volunteer who has demonstrated untiring commitment, visionary leadership, resourcefulness and creativity in meeting the needs of our community.

Peggy is an accomplished local artist and John was a Chapel Hill alum, an Army veteran, and a successful businessman.

John and Peggy started their own foundation in 2010. Throughout their life together, they were active members at St. Paul’s Episcopal Church, supported UNC athletics and academics, and were instrumental in building and operating the Vision Tennis Center (now Taylor Tennis Center) in Clemmons, one of the first indoor tennis facilities in the area.

Through their support of United Way of Forsyth County, they impacted countless lives in our community. John’s giving spirit lives on today through his family and his legacy of quiet generosity.

The Million Dollar Roundtable is UWFC’s highest level of philanthropic giving and its members have invested a million dollars or more in the work of UWFC over the course of ten years or less. This critically important group of donors allows the work of UWFC to deepen and become more impactful through their generous investments. This award is recognized nationally by the United Way World Wide and locally by United Way of Forsyth County.

To date, United Way of Forsyth County has recognized four individuals or families.