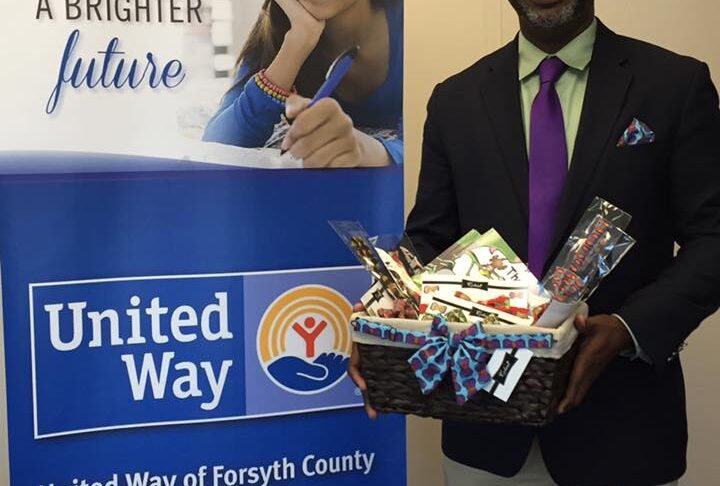 WINSTON-SALEM, NC – With a dream of getting his books in schools around the country, a local author, illustrator and designer has paid it forward by donating to the United Way of Forsyth County‘s (UWFC) book drive to benefit elementary and middle school students.

Terelle Coley, of Winston-Salem, a former art teacher who now works in the non-profit sector, has high hopes for making a difference in the education of kids from pre-Kindergarten to third grade.  His book The Jungle Family is first in a series of Colani Designs children’s book collection, to address such issues as blended families, being different, bullying, love and family. Coley decided to donate a portion of his first collection after seeing the UWFC’s Facebook event post about the purpose of the UWFC’s children’s book drive.

While focused on elementary and middle schools, UWFC’s book drive is part of a larger ambition to increase high school graduation rates in Forsyth County.  UWFC has invested $1.2 million with the Winston-Salem Forsyth County Schools as part of its Project Graduation — an ongoing initiative to raise the district’s graduation rate to 90 percent by 2018.  From a start rate of 70 percent, the current graduation rate is at 85.8%. That means there are 2,509 graduates who would not have graduated pre-2007. The average graduate earns $400,000 more in a lifetime than a drop out.  That amounts to a $1.004 billion impact on the community. Those statistics can improve with a 90 percent graduation rate.

“I am very happy to support the United Way, the Winston-Salem Forsyth County Schools, and increasing high school graduation rates in Forsyth County, all with one donation,” said Coley, a Kenly, NC, native who worked as a teacher in Fayetteville and Charlotte area school districts.

“From being part of a blended family to bullying, race and so many other issues in schools, children these days are exposed to a lot. We want to give them positive lessons and messages about family, friendships and that giving and receiving love has nothing to do with race or color,” Coley said.

In a unique way of expressing colors and characters, the book exposes children to worldwide cultures, education, as well as trendy designs for children and parents, as Coley has designed bow ties for kids and parents.

“Originally I designed bow ties featuring colorful images of the book’s characters for the kids, but parents started asking for them too,” Coley said, noting he created bow ties because kids identify well with bow ties.

Coley said the book was initially an experiment to share with friends, but once they saw it, he sold 50 copies and 60 bow ties in two weeks. Part of the book’s proceeds will go to starting a youth center in his hometown.

“Kids tend to get in trouble when they have nothing to do, so we want to make sure we address that with fun, interesting and constructive things.”