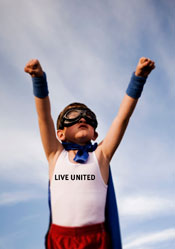 United Way Forsyth County has announced that the 2017 community campaign goal has been set at $15.5 million.

Last year, United Way Forsyth County raised $15.1 million in its annual campaign and funded over 60 programs through over forty agencies which provided much needed assistance for more than 78,000 Forsyth County residents.

President and CEO, Cindy Gordineer notes, “We hope that the entire community will be inspired to join the fight to address our most pressing issues. Through collaboration and partnerships, we have seen the high school graduation rate rise from 70.7% to 86.5% since 2007, veteran homelessness has ended and through funding from United Way, close to 60,000 Forsyth County residents were provided with food they otherwise couldn’t afford last year. However we know that to sustain true change, there are always new ways to work together, more resources needed and more to accomplish. United Way has a unique role in that we work to solve problems that no one organization can address alone.”

Campaign Chair, CEO Emeritus of Wake Forest Baptist Medical Center, Dr. John McConnell notes. “I am honored to serve as the 2017-2018 Campaign Chair. Since 1923, the Forsyth United Way has been serving individuals in our community and beyond. Because of the community’s involvement in the 2016 campaign we were able to decrease homelessness, improve preparedness for kindergarten, increase the high school graduation rate and help families become more financially secure. We know that as a community that when we unite in the fight, we all win.”