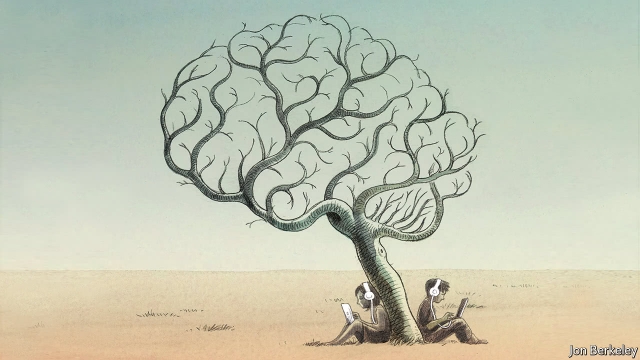 IN 1953 B.F. Skinner visited his daughter’s maths class. The Harvard psychologist found every pupil learning the same topic in the same way at the same speed. A few days later he built his first “teaching machine”, which let children tackle questions at their own pace. By the mid-1960s similar gizmos were being flogged by door-to-door salesmen. Within a few years, though, enthusiasm for them had fizzled out.

Since then education technology (edtech) has repeated the cycle of hype and flop, even as computers have reshaped almost every other part of life. One reason is the conservatism of teachers and their unions. But another is that the brain-stretching potential of edtech has remained unproven.

Today, however, Skinner’s heirs are forcing the sceptics to think again (see article). Backed by billionaire techies such as Mark Zuckerberg and Bill Gates, schools around the world are using new software to “personalise” learning. This could help hundreds of millions of children stuck in dismal classes—but only if edtech boosters can resist the temptation to revive harmful ideas about how children learn. To succeed, edtech must be at the service of teaching, not the other way around.

The conventional model of schooling emerged in Prussia in the 18th century. Alternatives have so far failed to teach as many children as efficiently. Classrooms, hierarchical year-groups, standardised curriculums and fixed timetables are still the norm for most of the world’s nearly 1.5bn schoolchildren.

Too many do not reach their potential. In poor countries only a quarter of secondary schoolchildren acquire at least a basic knowledge of maths, reading and science. Even in the mostly rich countries of the OECD about 30% of teenagers fail to reach proficiency in at least one of these subjects.

That share has remained almost unchanged over the past 15 years, during which billions have been spent on IT in schools. By 2012 there was one computer for every two pupils in several rich countries. Australia had more computers than pupils. Handled poorly, devices can distract. A Portuguese study from 2010 found that schools with slow broadband and a ban on sites such as YouTube had better results than high-tech ones.

What matters is how edtech is used. One way it can help is through bespoke instruction. Ever since Philip II of Macedon hired Aristotle to prepare his son Alexander for Greatness, rich parents have paid for tutors. Reformers from São Paulo to Stockholm think that edtech can put individual attention within reach of all pupils. American schools are embracing the model most readily. A third of pupils are in a school district that has pledged to introduce “personalised, digital learning”. The methods of groups like Summit Public Schools, whose software was written for nothing by Facebook engineers, are being copied by hundreds of schools.

In India, where about half of children leave primary school unable to read a simple text, the curriculum goes over many pupils’ heads. “Adaptive” software such as Mindspark can work out what a child knows and pose questions accordingly. A recent paper found that Indian children using Mindspark after school made some of the largest gains in maths and reading of any education study in poor countries.

The other way edtech can aid learning is by making schools more productive. In California schools are using software to overhaul the conventional model. Instead of textbooks, pupils have “playlists”, which they use to access online lessons and take tests. The software assesses children’s progress, lightening teachers’ marking load and giving them insight on their pupils. Saved teachers’ time is allocated to other tasks, such as fostering pupils’ social skills or one-on-one tuition. A study in 2015 suggested that children in early adopters of this model score better in tests than their peers at other schools.

Pay attention at the back

Such innovation is welcome. But making the best of edtech means getting several things right. First, “personalised learning” must follow the evidence on how children learn. It must not be an excuse to revive pseudoscientific ideas such as “learning styles”: the theory that each child has a particular way of taking in information. Such nonsense leads to schemes like Brain Gym, an “educational kinesiology” programme once backed by the British government, which claimed that some pupils should stretch, bend and emit an “energy yawn” while doing their sums.

A less consequential falsehood is that technology means children do not need to learn facts or learn from a teacher—instead they can just use Google. Some educationalists go further, arguing that facts get in the way of skills such as creativity and critical thinking. The opposite is true. A memory crammed with knowledge enables these talents. William Shakespeare was drilled in Latin phrases and grammatical rules and yet he penned a few decent plays. In 2015 a vast study of 1,200 education meta-analyses found that, of the 20 most effective ways of boosting learning, nearly all relied on the craft of a teacher.

The second imperative is to make sure that edtech narrows, rather than widens, inequalities in education. Here there are grounds for optimism. Some of the pioneering schools are private ones in Silicon Valley. But many more are run by charter-school groups teaching mostly poor pupils, such as Rocketship and Achievement First—or Summit, where 99% of graduating pupils go on to university and laggards make the most progress relative to their peers in normal classes. A similar pattern can be observed outside America. In studies of edtech in India by J-PAL, a research group, the biggest beneficiaries are children using software to receive remedial education.

Third, the potential for edtech will be realised only if teachers embrace it. They are right to ask for evidence that products work. But scepticism should not turn into Luddism. A good model is São Paulo, where teachers have welcomed Geekie, an adaptive-software company, into public schools.

In 1984 Skinner called opposition to technology the “shame” of education. Given what edtech promises today, closed-mindedness has no place in the classroom.