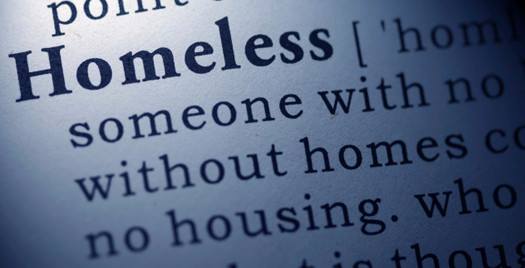 If you ask them, homeless veterans might tell you they only have a vague idea of what they look like, or how they got to where they are. At least that was true of the few we met in San Diego.

There are about 50,000 homeless vets in the U.S., according to the Department of Veterans Affairs. Veterans who have struggled with drug use or mental illness, unemployment or criminal records — or any number of things. The VA says it plans to end homelessness among vets by 2015.

Marcus Bennett is 32. He joined the Marines as a teenager and served for 10 years.

He hasn’t been living on the streets — which is what “homeless” sometimes suggests — but has been staying in a motel the past few months.

We met Bennett at an event for homeless veterans in San Diego called Stand Down.

It’s a pop-up, military-style tent village where vets can get help for a weekend. Volunteers offer haircuts, warm meals, cots to sleep on, legal help.

We did a little pop-up of our own — a portrait studio on the periphery — and asked the same questions of all the veterans who came by: How’d you end up here? What have you seen? How do you see yourself?

To get at that last question, we invited them to pose any way they wanted for the camera. And then look at themselves in the photos. They also told us their stories. We took them at their word. We’re not sure if they’ll ever see the photos here.

We liked the picture of Bennett smiling, but he wanted one without his teeth showing.

“It’s hard for me to sit back and smile and enjoy little things.”

What these pictures don’t show you is his past, and what he thinks about it: Buddies killed at war. His wife, or rather, his ex-wife. Their two kids, 2 and 9.

He told us about how his unit was one of the first to push into Iraq. And how, on their first day of combat, they wandered straight into a minefield. He later got a concussion from a mortar round. When he got out in 2010, he says, he had a hard time.

He started having crying spells. He drank a lot, got a DUI, spent some time in jail. Now he lives in San Diego — along with many more homeless veterans.

“When you’re in the service you try not to get the help — ’cause you don’t want to be looked at as weak.

“I feel like I was a failure as a husband, and I don’t want to be that way as a father. I’ve got so much more life ahead of me. I gotta put all this bad stuff behind me, and learn to cope with what’s been going on with me.”

“I want something where I’m looking more fun.”

Messner, 40, was born in Panama and served in the Army from 1996-2001 as a medical-supply specialist. She worked in restaurants when she got out. Couldn’t pay rent. She and her boyfriend started having fights.

Then, she says, her house burned down. Child Protective Services took custody of her children. She’s been living in an RV park since then. That’s where she met another vet, who told her about ways she could get help.

“I used to keep pictures of my kids when they were little. All the pictures, every card they wrote me. All that is gone.”

It had been awhile since she’d had a portrait made. She came prepared to work it. (Note the accessories.)

Dearie, 55, saw himself smiling, but didn’t think he looked happy.

He served in the Marine Corps in the late ’70s, and has been homeless on and off over the years, which is not uncommon. He has diabetes and had a stroke in 2006. The last time he had a portrait made was decades ago, when he was in the Corps.

Keone, 73, was born in Hawaii. He says he served two tours in the Army in Vietnam, doing special operations and reconnaissance.

Lately he’s been staying at St. Vincent de Paul Village, a nonprofit for homeless people in San Diego. He just had surgery on a blood clot in his right eye, hence the patch.

“I saw a lot of friends die. It’s hard. I don’t like to remember things, ’cause you see too many things happen. That’s why they call it, what, post-trauma stress?

“You wake up, you’re screaming, you’re fighting. You try to get help, and that doesn’t solve the problem, but it always comes back. So I always say, you gotta deal with it.”

“I need to trim my mustache down. Looks kinda mean.”

Dolas Jackson, 56, says he enlisted in the Marine Corps when he was 16. He has an apartment now, but was homeless for about five years. The last portraits he had taken were for his high school yearbook and his Marine Corps recruitment photo.

“It’s hard to read a face sometimes. Even just looking at these photos I’m seeing where I need to do more stuff like this. I need to get out what’s inside of me from the service, because I can see the wear and tear it’s got on me. You try to not let it become a part of you, but it’s always a part of you.”

“That helped out ’cause it relaxed my jaw line. You can tell I got a lot of tension still in me.”

Baca felt better about how she looked when the breeze started blowing and she posed with her hands in her pockets. The last photo she’d had taken was pretty recently — at her wedding.

She did clerical work in the Navy in the late ’80s and never deployed to a war zone. After she got out, she ended up homeless for about 10 years. “Living in motels and stuff like that.” She’s had a house for a little over two years now.

“It makes you a different person, going in the service. It makes you more structured. My mom said I was different when I came back.”

“That is good! The one with the pockets.”

These days, Fred E. Parks Jr. is happy to look a little fat in his pictures. It’s better than a photo his mother keeps as a reminder. “[It’s] a picture of me when I was doing drugs. I look like Skeletor’s little brother,” he says. “Now my mother has her son back.”

Parks was in the Army for about five years in the ‘80s. After he got out, he ended up homeless for about 25 years — addicted to crack, going by the name “Shorty.”

Eventually, and very recently, he got himself off the streets. He got married. Now that he’s clean, his mom takes his picture all the time, and insists he go by his birth name, including the middle initial.

“Time goes by so fast when you’re homeless — you don’t know. Some [vets] don’t know about services they’re offered. Other guys just don’t want help. How you tell a young kid not to get high so he can forget? A lot of us do things because we’re hurting inside. We don’t wanna feel it so we get loaded. Today I can face my problems.”

Parks’ wife, Jessica, was homeless for 35 years. Someone once told her she doesn’t look homeless.

“I said, ‘Excuse me, Miss, but what is a homeless person supposed to look like?’”

Addington, 67, served with the Navy in Vietnam. He says he doesn’t remember the last photo he had taken, and didn’t seem to care which photo we used. He also didn’t seem too impressed by outreach efforts to homeless vets.

“Veterans Administration put on this show. Don’t get no medical help or nothing.”

Martin, 29, says the last photo he had taken was a mug shot.

He was a Marine for four years, then in the Army for three. And the story he tells is not unusual.

He was a medic in Iraq — part of a quick reaction force. High-pressured, fast-paced and intense, which doesn’t always translate to work back home.

After getting out of the service and returning to California, he learned that two friends he’d served with had committed suicide. He couldn’t keep a steady job. Couldn’t pay rent. Got in trouble with the law. Lost his EMT certification and his car. He couldn’t relate to people, and imagined what people thought of him.

“They look down on you. ‘You’re a vet, but you probably did it to yourself.’”

For a while, Martin didn’t know what resources were available to him. Then he learned about Stand Down. He went looking for housing, and lucked out. He got an appointment with a nonprofit that helps with that. On the last day of the event, he seemed optimistic that he wouldn’t have to stay homeless.

“It’s a temporary setback — not a lifestyle choice. At least that’s what I try and believe.”

Stand Down ended before his appointment, though, so it was back on the street for one more night — with a new backpack and sleeping bag, at least.

Martin spent a few more nights on the street, and he wasn’t sure he’d ever get housing.

Weeks later we heard from the housing outreach people at Stand Down — Martin has a roof over his head, and he’s trying to find a job.

Click here for the photos that accompany each story.