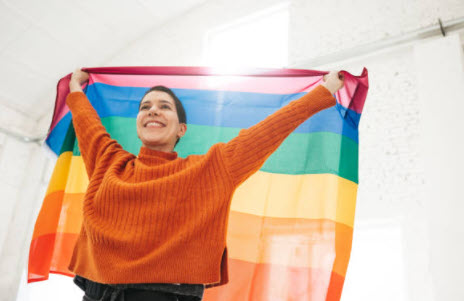 The Stonewall Riots weren’t the first time that LGBTQ+ people stood up against police harassment — before Stonewall, there was a riot in Los Angeles at Cooper Do-Nuts, and in San Francisco at Compton’s Cafeteria. But Stonewall is definitely the best-known, and led to the creation of what we know as Pride today.

It started with a police raid on a hot summer night in Greenwich Village. Cops stormed the Stonewall Inn, arresting patrons and forcing them into waiting police vehicles. But a nearby crowd grew restless and angry, and eventually someone — there’s debate over who — started whipping onlookers into fighting back. They pelted the police, forcing homophobic cops to retreat, and aggressive street confrontations continued over the next few nights.

Following the Stonewall Riots, organizers wanted to build on that spirit of resistance. The following year, they organized a march to Central Park, and adopted the theme of “Gay Pride” as a counterpoint to the prevailing attitude of shame. That march down Christopher Street soon expanded to other cities, with many more joining in year over year through the 1970s until Pride became the massive celebration that we know today.